The average values that characterize the climate of a given region, depend on the time interval used and do not present the same results when comparing one year with a decade or a century. Moreover, it is important to have long series of data to study the climate variations and trends. The Portuguese Institute for Sea and Atmosphere, IP, provides weather data series, whose first observations date back to 1865. 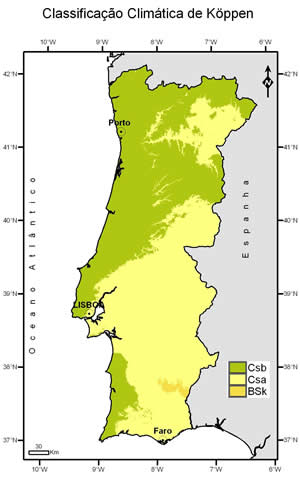 As agreed by the World Meteorological Organization (WMO) climate is characterized by the average values of various climatic elements over a period of 30 years and we designate a normal value of a certain climatic element as the average corresponding to a number of years long enough to admit that it represents the predominant value of that element in the considered region. According to WMO it is called climatological normals to the meteorological statistical results in periods of 30 years, starting in the first year of each decade (1901-30, 1931-1960, ..., 1961-1990 ...). These are the standard reference, though one can calculate and use meteorological interim periods, for example, 1951-80, 1971-2000.

In this area of the site IPMA offers climatological normals information regarding 21 of its stations, for the period 1971-2000, including monthly and annual values of major climatic elements in graphical and numerical form. IM presents also the values of maximum and minimum air temperatures and precipitation totals as well as their extreme values.

The results of the climatological normals 1971-2000, the latest available, allow also identifying the different types of climate, having been used for mainland Portugal the Köppen classification, which corresponds to the last Köppen revision in 1936.

The results obtained by this classification maps for climate, serve to confirm that for most of the mainland territory the climate is temperate continental, Type C, checking the subtype Cs (A temperate climate with dry summer) and the following varieties:

Csa, temperate climate with warm summer and dry in the interior regions of the Douro Valley (part of the district of Bragança), as well as in regions south of the mountain system Montejunto-Estrela (except on the west coast of Alentejo and Algarve).

Csb, temperate climate with dry and mild summer, in almost all regions of the northern mountain system Montejunto-Estrela and the regions of the west coast of Alentejo and Algarve.

In a small region of Alentejo, in the district of Beja, is Arid Climate - Type B Subtype BS (steppe climate), BSK variety (cold steppe climate of mid-latitude). In relation to the Azores and Madeira Islands in accordance with the original classification of Koppen, it appears that:

Azores Eastern Group is the type Csb temperate climate with dry summer and mild in the Eastern Group and Central and West Group is Cfb, i.e., oceanic climate, also sometimes called temperate maritime climate which is temperate humid with a summer which occurs in temperate regions away from major landmasses.

Please note that the graph of anomalies are only represented the annual values ​​in years when there was no failure monthly, ie 12 years with monthly mean values​​, those years in which data are not presented in the graph of anomalies, this means there was at least one month of incomplete data and therefore does not present the relevant technical anomaly, which does not mean that there is no data in the remaining months of this year.

The rules of the WMO (WCDP No. 10 / WMO TD No. 341, 1989), indicate that there should be a calculated clearance monthly if more than three failures consecutive nights or more than 5 alternate, this month, which means that whenever there is, at least 4 consecutive days, or 6 alternating with no data in one month can not calculate the monthly or the annual tabulation. The monthly averages are displayed in the upper graph of the results thus at least 18 years of data in each month, for available stations.

For further information we suggest to consult the guide practices climatological WMO (WMO No. 100, 3rd Edition, 2011). "

The extreme values ​​and the numbers of days are provisional results, so some values ​​may eventually be modified with the procedures for re-validation in progress.